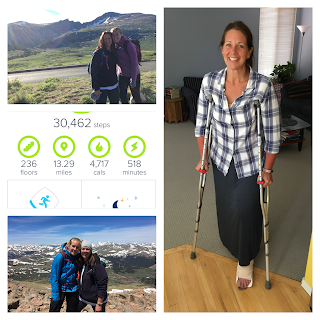 It was a hard summer, but I've been cleared to walk again for exercise, so I'm back at it.  Just a couple miles each day with the neighbor, but at least I'm moving again!  I was so paranoid about gaining weight while I had the cast on that I was really careful about what I ate, and ended up down 10 lbs when the cast came off ... which I promptly gained right back.

All of that to say that I am back in the saddle, or on the sidewalk (or insert appropriate metaphor here), and back to logging on Loseit.  They've added cute and creative notifications to the app that help too!

Yesterday I re-read my blog from start to finish.  For the motivation alone, I'm glad I blogged.  And so I begin again.  Or resume.  Or continue.  Nothing deep here, other than I'm back at it.  Anyone else?

Once more unto the breach!

I don't know why you'd be surprised that The Girl Who Cried Skinny might also be a slacker blogger.  Seriously, people!  Pay attention :)

And then I hit 90 lbs. down for about a minute and I travelled a ton for work and a lot of time passed and I'm still down 50 but also I'm back above 190.

So yeah, there's that.

But I haven't given up and I'm back to logging and if you're wondering about what happened, I'm no scientist, but I think it boils down to this:

When I lost the majority of my weight, I walked almost every day of the week and I rarely had alcohol.  For the last year or so, I've barely walked 2x a week and have alcohol almost every day.

This is not how anyone would describe me: super thin 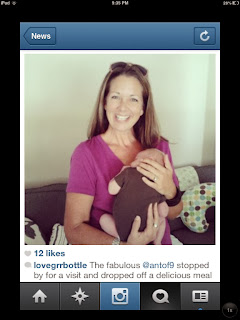 Seriously.  No one would describe me this way.

I recently took A few months ago, I took food to a friend with a new baby. 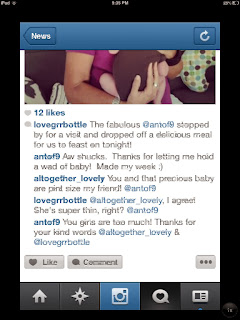 By the way, holding freshly baked baby is one of the Great Joys in Life.
at November 07, 2013 1 comment:

And so I thought I'd put on this shirt one more time.  Let's discuss.

My grandmother sent me birthday money one year, and I took it straight to the Bronco store at the stadium.  I went with two friends, and was quickly embarrassed at how big I was.  Actually, let me clarify that.  I wasn't embarrassed at how big I was, as I'd been that way pretty much as long as they'd known me.  I was embarrassed by how few shirts were even close to fitting me.  How twisted is that?  I'd been shopping at Lane Bryant for so long, I really wasn't used to a store that fit average-sized people.  This was one of the few that came in not only XXL, but 3XL and 4XL.  I really should have gotten the 4XL, but I was so ashamed of how big 3XL sounded that I couldn't bring myself to buy one size bigger in front of these little friends.  I wanted a pic to send to GM in my thank you note to her, which is probably the only reason I even have a pic of that day. 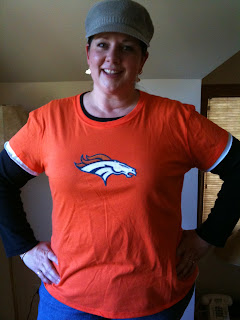 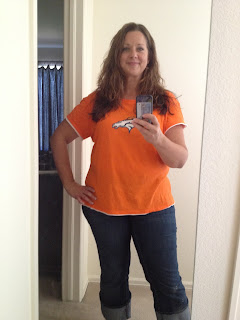 In this pic, the shirt hasn't been washed so is the biggest it will ever be. It was cold in the mountains that weekend, so I was forced to wear an unplanned long-sleeve shirt with it, making it even tighter.  I am sucking in my gut like it was my job and my hands on my hips?  They're pulling the shirt forward, tight in the back, and trying to make it looser around my gut.  It was not a good day.  After that, I only washed it in cold and never dried it, but there were a few years in there where I didn't wear it at all.


This pic is from 2012's season opener.  See how happy I look that the shirt is hanging loosely on me?  Smug, ain't I? 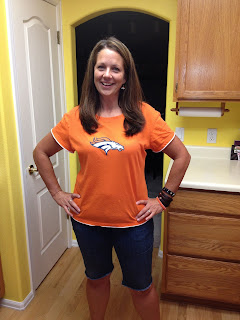 And this is from the 2013 (pre-)season opener last night.  I've been drying the shirt to shrink it, but it's really too big to wear any more.  When I asked The Hubs to take the pic, he asked what I wanted to highlight.  "Uh ... how much smaller I am?"  So then he played photoshoot stylist and actually used a chip clip on the back of the shirt (just call me Jessica Simpson -- anyone remember that?).  I'm not ashamed to admit that that made me really happy and I giggled.

And this is definitely the last season I'm wearing this shirt.  Which is kind of sad, because I really like it now :)


Someone on SparkPeople asked me recently, "isn't it motivating to look at pics that show your progress?"  And I had to answer with a resounding, "YES!"  Seriously, I thought I was SO SMALL last year just by virtue of seeing progress!  Progress is good.  Any progress.  Less heavy breathing, less knee or back pain, being able to walk further or faster or whatever.  Progress is progress, yo!
at August 09, 2013 8 comments:

A cough drop is a weird taste in the summer

Have you ever had a summer cold?  I'm sure I have, but I really don't remember anything like this past week.  I learned salad tastes terrible when you have a cold (seriously, where is my won ton soup?), and cough drops taste weird when you're wearing shorts.  And you still want to be totally covered up at night, so then you sweat.  And don't get me started on going to bed when it's still light out!  If you go to bed at 7:00 at night in the winter, at least it's already dark.  But this week?  It's just all weird.

Oh, and it's been raining here.  Which is good (here's why, if you don't know).  But doesn't make me feel any 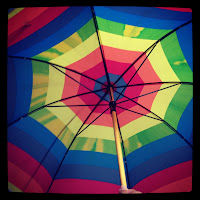 better.  It did, however, garner me this awesome umbrella shot which I'm including for no other reason than "it's pretty."

This is the most I haven't worked out since I started.  I mean, since my neighbor and I started walking on weekdays last year, I have been a regular worker outer.  Over time, I added weekend workouts even though I was going by myself.  I even did two-a-days sometimes!  And even when it's been difficult to fit a workout in or find a workout location, I still don't think I've gone more than 2 consecutive days without a workout since May 2 of 2012.  And those days "off" I took -- the ones I can think of?  They were Christmas and the week I did the Seattle Half Marathon and the week we just had in Kauai.

Great thing is I got on the stationary bike a little while ago and did 40 minutes.  Nothing to boast about, but I have to admit it felt good for the first time in 5 days :)
at August 01, 2013 2 comments:

The sun will come out tomorrow ...

The plan for today had been to do my first fourteener and you'd have been reading about that late tonight or some time tomorrow.

Instead, we got rain on and off all night last night, and this morning as well.  And because I'm a native and we live in a drought state*, I'm not allowed to complain about rain (PSA:  DO NOT COME TO COLORADO AND COMPLAIN ABOUT RAIN.  EVER.  WE WILL RUN YOU OUT OF TOWN).  Truly; I'm not.  I really do love when we get rain.  But it did put a little crimp in our plans for today ....

And in fact, the rain wasn't really the only reason I didn't go today.  For the last 3 days, I've been battling a summer cold and/or allergy something-or-other that makes me feel less than 100%.  So although I really really wanted to do that hike today, it's probably better that I don't; and so I did feel a little relieved when I got the email last night that it was cancelled for sure.

In preparation for this epic hike, I have a new Camelbak, and I had my trailrunning shoes ready, and I'd thought a lot about what I'd wear, and what food I'd take, and ... well.  It will just have to wait for another day.  And as you can imagine, I was still disappointed that it was cancelled

And so I woke up this morning feeling a little sorry for myself.  A little pathetic.  A little full of nose.  A little scratchy of throat.  And a lot "wah! I'm not doing a fourteener!"

And then I saw this:


*Much of Colorado is a very dry state averaging only 17 inches (430 mm) of precipitation per year statewide and rarely experiences a time when some portion of the state is not in some degree of drought. The lack of precipitation contributes to the severity of wildfires in the state such as the Hayman Fire, one of the largest wildfires in American history, and the Fourmile Canyon Fire of 2010, which until the Waldo Canyon Fire of June 2012, and the Black Forest Fire approximately a year later, was the most destructive wildfire in Colorado's recorded history.
at July 28, 2013 No comments:

Don't use this blog entry to do your English Lit homework, kids.  I have no idea if my memory is correct or not!

One of the few things I remember from my lit classes is that the tragic flaw isn't always a wholly bad thing.  That is, it was a good quality or characteristic that "went bad" ... and thus became tragic.

The other night I emailed my mom, sister, and brothers the stats I posted in my last blog entry, and my mom's reply was, "no surprise when my daughter is dedicated to something."  The light went on in my head that OHMYWORD my tragic flaw has finally been put to good use!

For years, I've been The Most Stubborn Child My Parents Had (I was also The Most Rebellious Child They Had, but that's another story), and my stubbornness has gotten me into more trouble than you can imagine.  My father is from the Dutch province of Friesland, and evidently, Frisian stubbornness is legendary, and I got ALL of my dad's stubbornness.  And then some.

So now I know:  the reason I have been able to stay dedicated and committed for the last year is because I am stubborn.

So really, all the drug companies need to do is to figure out how to make people stubborn and they can make piles of money.

I got a follow-up email from my mom when I said something back to her about how my stubbornness was actually paying off.  I will cherish it forever.  She said, "Do you know that your dad always considered stubbornness (in himself) a positive quality?"  My dad died in 1998, and I did not know that.  And I'm so glad I do :) 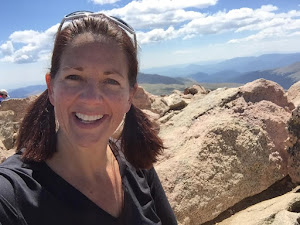 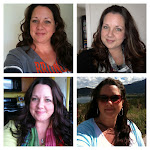 But enough about you; here's more about me!